On Effect Mapping and Pirate Metrics

During the Specification by Example training I talked about recently, Gojko Adzic introduced me to Effect Mapping. He’s writing a more extensive booklet on the subject, of which he’s released a beta here. I think this is an excellent tool for exploring goals, opportunities and possible features. It can be used as a tool to generate a backlog of features, as a way to explore possible business hyptheses, and perhaps even as a light-weight way to do strategic management of a company.

But let’s start with a short description (see Gojko’s site or beta booklet for the longer one) of what effect mapping is.

The basic structure of an effect map is that of a structured Mind-Map. A mind-map is a somewhat hierarchical way to note down ideas related to a central theme.

The effect map is a mind-map with a specific structure. The different levels of the mind-map are based around the answers to four questions:

Additional levels can be specific User Stories, tasks, or actions, but that depends more on how you want to organise your backlog. The important thing is that this provides an uninterrupted flow from high-level goal or vision to concrete work.

In this way, effect maps can provide one of the important missing steps in the Agile software development world: how to determine what features provide value supporting specific business goals.

The goal used in the centre of the effect map is supposed to be a measurable goal: we need to know unambiguously when this goal has been reached! Gojko gives a nice overview of the way this can be done, using a lighter-weight version of the way Tom Gilb prescribes for making goals measurable. This involves the scale (thing we’re measuring), meter (way we’ll measure it), benchmark (current state), constraint (minimum acceptable value, break even point), target (what we want it to be).

Effect mapping is not just about what ends up on the diagram, it’s also the process of generating the map. This is, of course, a collaborative approach. Getting the involved people together, and creating and discussing the goal, and the ways to get there. Important is that both business people with decision power as well as subject matter experts and technical people that can know possible solution directions should be present. And yes, they do have time for this. Using diverge and merge, as discussed in my previous post, can be very useful again. There’s more, but it’s not relevant to the rest of my post, about iterating, prioritising, etc. So just go and read the booklet, already. 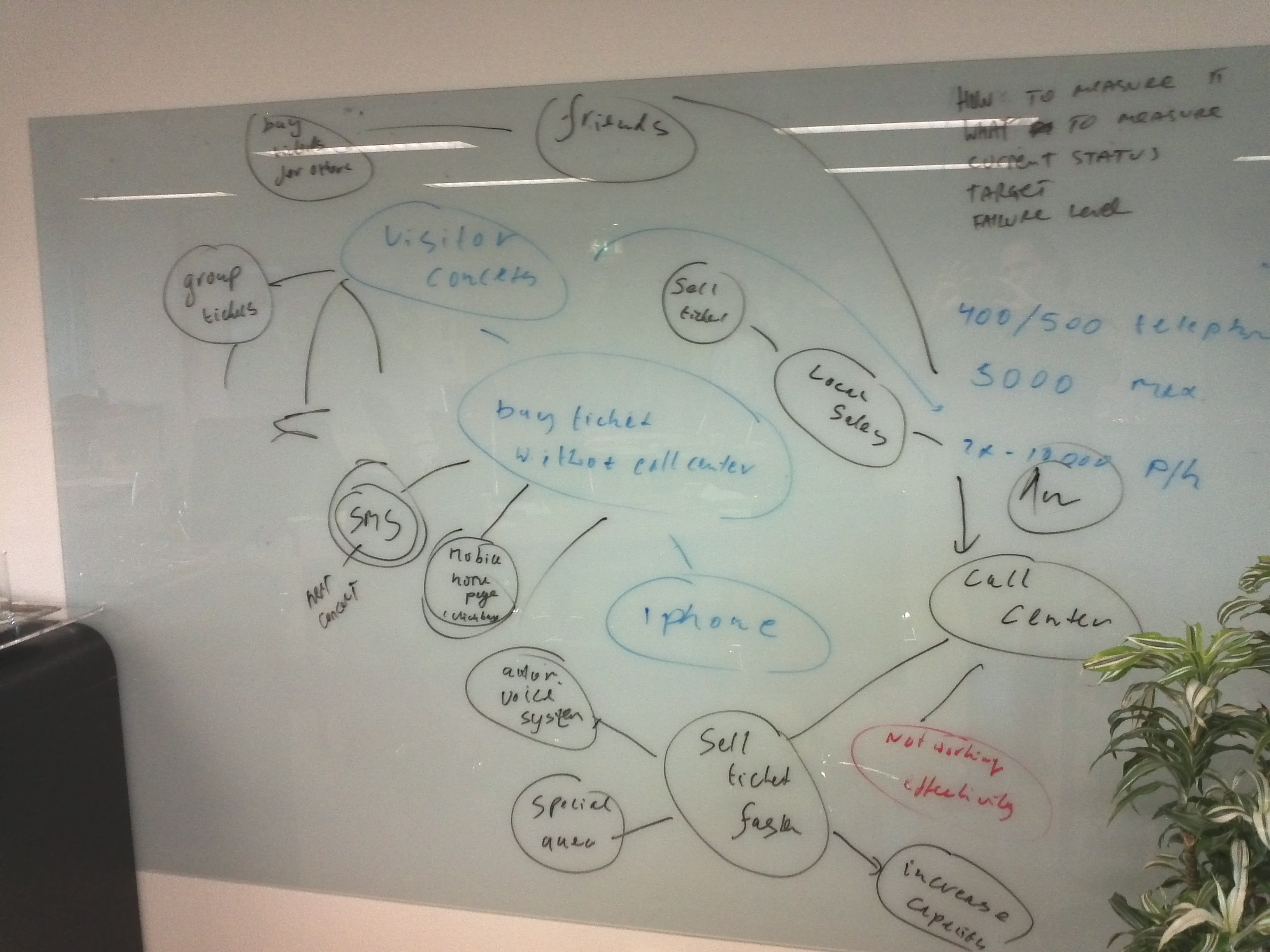 In his booklet, Gojko also links this process to the Lean Startup process of customer development. I think this is a great combination, but I would like to see some tweaks in the type of measurements we use for goals in that case.

In his book The Lean Startup, Eric Ries talks extensively about the importance of Actionable Metrics, as opposed to Vanity Metrics. An actionable metric is one that ties specific and repeatable actions to observed results. A Vanity Metric is usually a more generic metric (such as total number of hits on a website, or total number of customers), that is not tied to specific (let alone repeatable) actions. There can be many reasons why those change, and isolating the reason is one part of making metrics actionable.

Dave McClure user the term ‘Pirate Metrics’ to talk about the most important metrics he sees for organisations:

These are also the familiar ‘funnel’ metrics, and the above link to Ash Maurya’s site has much more background on them. When using these metrics, it is recommended to do Cohort testing, so that you can see the different results for different groups of users (again, see Ash Maurya’s site). Doing this such that the source of the (new) users is trackable allows you to identify the best ways of increasing the number of users, without deluding yourself into extrapolating from great growth figures if they’re the result of a single marketing action.

This is probably the only spot where Gojko’s booklet could use some tuning. The Gilbian metrics he uses for his example are functional metrics (SMART, and all that), but not the type of actionable metrics that would fit into the lean startup mold. In this example, we’re talking about reaching a certain number of player (one million), in a certain space of time (6 months), while keeping costs and retention rates to certain limits. Gojko does of course explain how to do this iteratively, taking a partial goal (less player than in the end-goal) and checking at a defined milestone whether the goal was reached. And because we’ve only done one ‘branch’ of the effect map, we do have a specific action to link to the result.[

If we were to re-cast this more along the lines of our pirate metrics, we could rephrase the goal as increasing the Acquisition and Activation rates. To be clear: this is a whole other goal! This goal is about a change that will ensure structural growth in the longer term. The goal on 1M extra users could (perhaps) be reached by increasing marketing spending (note that only  operational costs are taken into account in the original example). In that case, the goal would be reached, but given that there is a typical Retention rate of (for example) 6 months, then there would be an equivocal exodus of users after that time. If the company had reacted based on total number of users, this could lead to incorrect actions such as hiring extra people, etc.

If the CEO comes down with the message ‘We want 1 million users!’, and it turns out he wants that in about 6 months time, we can then say, “Ok, that’s about 5500 new users per day, or[

]13 a growth rate of 1.6%”; (per day, again). Then we can start creating and testing hypotheses in much smaller steps than those 6 or three months. What’s more, by using these metrics (and goals) it should become possible to use the same metrics further out into the effect map.

And if this is something at a larger scale, teams can take some of the higher level hypotheses / business activities and use their own domain knowledge to devise more experiments to find a way to reach those goals. Since churn is included in the figure, this also allows experiments based on increasing retention rates. And since we’re doing cohort testing on pirate metrics, we can know day-to-day and week-to-week whether what we’re doing has the expected results. This extends the set-based design paradigm used in effect mapping to a broader organisation.

I recently came across the system of Hoshin Kanri (via Bob Marshall). This has some remarkable similarities to what I’ve been talking about. It’s also a method to ensure policy/goals can be distributed throughout the organisation, with involvement of multiple levels and stakeholders at each step. I’ve not studied it extensively, but to me it does feel like a strictly hierarchical system, and one that is mostly used in large companies with a fairly slow (yearly and half-yearly) cycle time. It is used by Toyota, and is part of Total Quality Control, which is supposed to be “designed to use the collective thinking power of all employees to make their organization the best in its field.”; It’s nice to see that everything has already been thought of, and we’re just repeating the progress of the past:-)

The difference with effect mapping is its light-weight focus, and the ease with which effect mapping can more easily be used in less hierarchical organisations. In fact, I think such a system might well be a prerequisite to the type of organisations we’re talking about in light of the Stoos network: “learning networks of individuals creating value”;. My recent proposal for a session at the Stoos Stampede was precisely about finding out how we can link an organisation’s vision/mission to goals specific enough that teams can work towards them independently, but open enough that they would not suffocate and entrap those teams. I think this might be one solution to that problem.