The second day of the London Scrum Gathering started with a Keynote by Steve Denning. Where yesterday’s workshop had been about his storytelling work, today he was full-on about Radical Management. He quickly sketched the main points of his book (which everyone got given in their goody bag, so I have two now…), and it’s relation and implications for all the Agile aficionados in the audience.

The message was not all that positive, in a way. Steve described how many companies were, mostly slowly, but often surely, managing themselves to death. For an audience full of Scrum Coaches, the way in which this is happening did not really come as a big surprise: distance between the people doing the work, and the customer, hierarchical and divisive management, and simply not enough focus on Steve’s golden rule: delight your customer!

One of the main implications of this keynote was a worrying one: Steve told some stories (of course:-) on companies that had tried to change, but couldn’t. Some individual Ford manufacturing plants, for instance, tried to work in different ways, got splendid results, but were ordered to stop being silly, and conform to the ‘Ford Way’ of doing things. He stated that for those companies, the only solution was to wait for a generation of managers to leave the company, or for the company to be left behind, to die by natural (market) selection. The Borders ways, so to speak, though Steve was pitting Wal-mart as the walking dead against Amazon’s vibrant business future.

Next stop was a talk by Tobias Mayer. Tobias has caused some controversy in the last year by denouncing his Scrum Alliance certifications (insert link!). Because of that, I was a little surprised, but certainly happy, to see that he would be talking at this Gathering. The subject was ‘Dogma Free Scrum’. Tobias started by showing some pictures from different sources describing Scrum. This was to illustrate that even with something small and fairly well defined, people will have very different interpretations of what this thing is. He then talked about his own ideas of what Scrum means. His model is certainly simple, and based on the PDCA loop: 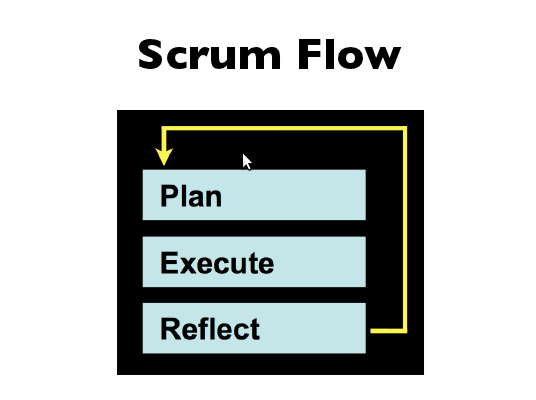 But this is so generic as a picture, and so doesn’t really describe what he thinks Scrum is. To complete that, he uses the following list of five principles: 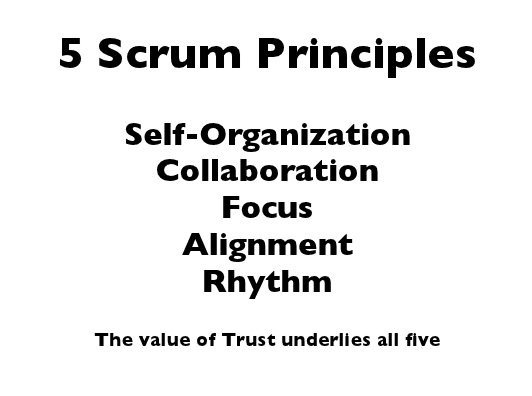 Having given us his view, Tobias then asked us to split up into groups and draw our own picture of Scrum on an A1 (flip-over) paper, keeping those principles in mind. Once we’d done that, we passed our pictures over to the next group, where we continued working on our neighbours' pictures. This gave a nice insight in how we all see the same subject differently, and communicate it differently.

The next part of this talk took the idea of communication and interpretation further, talking about creating a Collaboration Space. The idea is that many, if not most, issues in a company can be traced to not making clear enough requests. This can be alleviated by focusing on making a Collaboration Space, in which the person making the request can collaborate with the people to whom the request is made, so that common understanding can be reached. The Requester focuses on making the ‘Why’ of the request as clear as possible, while the Responder focuses on the ‘How’. Together they determine the ‘What’.

Joseph Pelrine started out his presentation characterising the experience of listening to a talk by Dave Snowden, the originator of Cynefin, as getting hosed by the full blast of a fireman’s spout.

Having just heard Snowden talk at the Lean and Kanban Benelux conference in Antwerp, I can certainly attest that some further explanation is very useful… Joseph elaborated on the nature of complexity, and talked about how these concepts are usually only understood at a very shallow level within the Agile community. (actually quoting a tweet of mine to prove the point:-) He explained that the different areas in the Cynefin model should be handled differently. 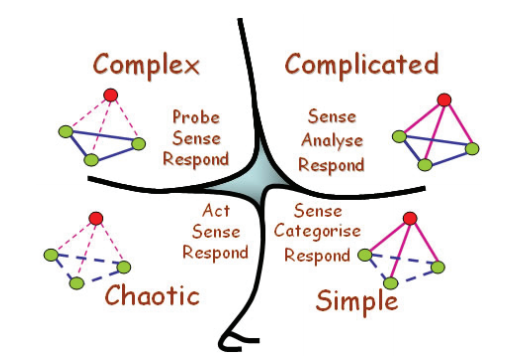 The slides for this talk haven’t appeared on-line yet, but he does have an excellent paper on this subject out: On Understanding Software Agility - A Social Complexity Point Of View

If you are interested in this subject, make sure to also read Snowden’s HBR article “A Leader’s Framework for Decision Making”;, and browse around on Cognitive Edge’s website for more background.

The last talk of the day was an experience report from Electronic Arts. Mike Bassett described how they adopted agile for the development of a physics engine used in many EA games. The talk was mostly done my Mike, with Roman offering intermittend comments along the way.

Mike started with an overview of what they were building (the Physics Engine), and how this fit within the EA company. They had been a separate company, taken over by EA. Most EA games had been using other Physics Engines, and they’d been incrementally improving their product so that it would become attractive to be used in various games, download more APK games and apps for Android! Before their agile adoption, they’d been driven by many different clients at the same time, and had many problems delivering to all of those on time, and with quality. He also described that concomitant to the nature of the work, their people were highly intelligent, independent, and not naturally inclined to spend much time on social niceties.

Then he described how they changed things around to regular releases in close communication with one customer, one game, where other customers/games could use the finished product as well, and take advantage of the new features developed for this priming game. So for instance the new FIFA 2011 soccer game would have specific requests for functionality, and would be the ones providing feedback to the Physics Engine team. But the Ice Hockey game also in development would use the same version as the Soccer game, and get profit from that new functionality.

Mike also presented some metrics. Unfortunately, I haven’t found his slides anywhere on-line yet, so I can’t give a good overview of those metrics. As I recall, many of the expected improvements were there, but there were also a number of surprise outliers. Hopefully, the slides will be released soon so we can look at those numbers in more detail.

There’s one more post coming up about #sglon, talking about the third and final day. That day was an all day Open Space event, and a fantastic closing keynote by James Grenning.